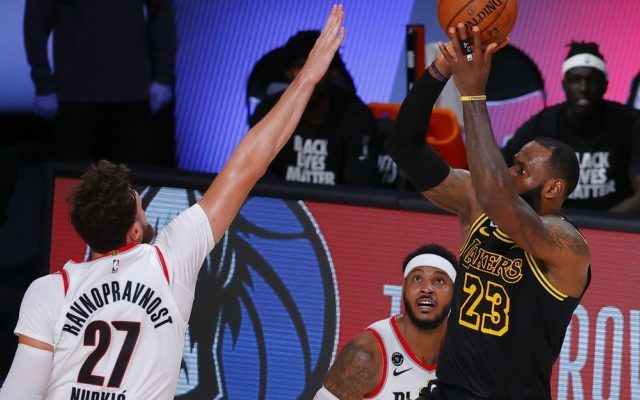 LAKE BUENA VISTA, Fla. (AP) — The Los Angeles Lakers jumped out to an apt 24-8 lead on Kobe Bryant Day and dominated the Portland Trail Blazers the rest of the way, taking a 3-1 advantage in their playoff series with a 135-115 victory Monday night.

LeBron James had 30 points and 10 assists in 28 minutes before heading to the bench late in the third quarter. The Lakers led by as many as 38 points for their third straight win in the opening-round series, the team’s first playoff appearance since 2013.

The Trail Blazers won the opener but have appeared gassed in the past two games. Damian Lillard, the MVP of the seeding games in the NBA bubble, had 11 points before leaving with a right knee injury in the third. Jusuf Nurkic had 20 points and 13 rebounds.

Anthony Davis added 18 points in 18 minutes for the Lakers before leaving the game midway through the third with back spasms.

The Lakers, the top seed in the Western Conference, can close out the series on Wednesday.

It was considered “Kobe Day” because Monday was 8/24, the two numbers Kobe Bryant wore during his 20-year career.