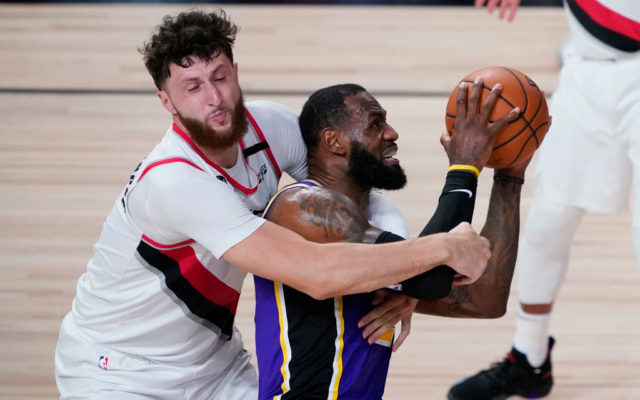 Damian Lillard and CJ McCollum came out like men on a mission Saturday night, but it wasn’t enough. The Lakers took Game 3, 116-108, and a 2-1 lead in the series.

Lillard and McCollum combined for 39 of Portland’s 57 first half points. The dynamic duo finished with 52 points — Dame 34, CJ 28 — while the other five Blazers scored the other 56 points.

Carmelo Anthony showed up in the third — scoring 13 of his 20 in the period — but the Lakers scored 40 to open the second half. Meanwhile, the Portland bench was practically non-existent.

Gary Trent Jr. had six points, and Mario Hezonja scored one basket. Off the bench, Anfernee Simons, Trent and Hezonja combined to shoot 3-of-15 from the field. Wenyen Gabriel, who didn’t start Game 3 after starting Games 1 and 2 for the injured Zach Collins, did not attempt a shot in just four minutes.

The Blazers were called for 25 fouls in the game, compared to the Lakers 21, but somehow LA shot 43 free throws to Portland’s 19. That’s not a misprint; LA shot 24 more free throws than the Blazers.

On the flip side, LeBron James bounced back from a 10-point performance in Game 2 with 38 points, 12 rebounds and eight assists in Game 3.

Anthony Davis struggled for much of the game, but finished with 29 points overall after scoring 12 in the fourth.